Ship 461's Skipper, Timothy Wile, and Program Mate, Andrew Cowles, attended Seabadge Course 13-PA-12 that was held during the weekend of 5 through 7 October 2012.  While the students had breakfast at their billet, lunch and dinner were had in the Coast Guard Station's galley.  The food provided in the galley was good and the dining area of the galley enjoyed a pleasant view of the Delaware River, including the battleship USS New Jersey, which is moored across the river in Camden, NJ, and one could enjoy watching the river traffic while eating their meals. 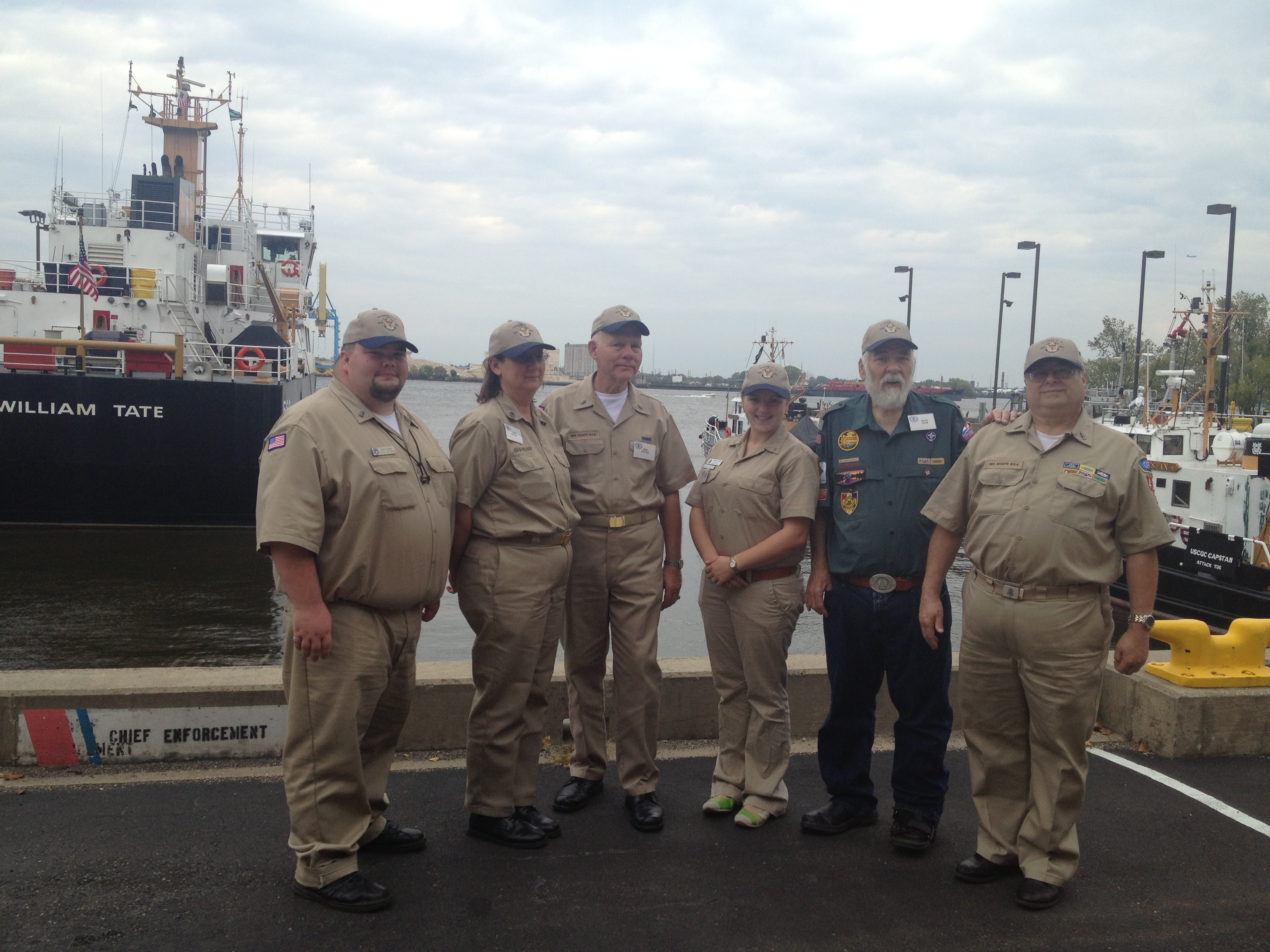 Each Crew elected a Crew Leader and an Assistant Crew Leader.  Mate Cowles was selected as the Assistant Crew Leader of Alpha Crew.  Approximately 20% of the students at the course, at at least half the instructors, including the Course Director, were women.  The photo at the left shows Skipper Wile with the members of Bravo Crew with the Buoy Tender USCG Cutter William Tate moored in the background.  The training commenced at 1600 hours on Friday, 5 October 2012 and students did not return to their billets until nearly 2300 hours.

Saturday training commenced promptly at 0800 hours and the students were released from instruction at an early 2130 hours so as they could work on their various Crew assignments.  Saturday's instruction included a tour of the Buoy Tender William Tate and the photo at the right shows Skipper Wile and Mate Andrew Cowles seating in the galley of the William Tate during the tour.

Training on Sunday, 7 October 2012, commenced again promptly at 0800 hours and the students and staff assembled for a short chapel service.  Each Crew was to provide a Chaplain's Assistant for the service and Skipper Wile was chosen as the Chaplain's Assistant for Bravo Crew.  The instructional portion of the program concluded with each Crew providing a 10-minute presentation of its plan for a 14-day long cruise, including necessary vessels, equipment, training, tour and float plans, mooring, tours and the like.  Seabadge graduation took place after lunch on Sunday and was held in a land ship type ceremony with full naval honors.

Graduation did not include the awarding of the Seabadge, however.  In addition to the weekend of training and exercises, students also have to complete a set of tasks and accomplish goals related to their Ship and Sea Scouting that were created by the students themselves, with the guidance of their respective Crew Advisors.  This set of tasks and goals is known as a "Rutter."  The "Rutter" is designed to allow the students to put into practical use the knowledge and skills learned during the Seabadge training weekend.  Students have one year from the end of the training weekend to complete their "Rutters" and only then will they be awarded and entitled to wear the Seabadge pin.  Skipper Wile and Mate Cowles completed their Seabadge Rutters in September 2013 and were awarded their Seabadge pins by Charles Wurster, National Commodore, and R. Keith Christopher, National Director, Sea Scouts, BSA.

In addition to being trained on how to run a successful youth-led Sea Scout Ship, Seabadge also afforded participants the opportunity to become acquainted with other Sea Scout leaders from throughout the country, to exchange ideas and practices, and to utilize and combine resources to make the Sea Scouting program more enjoyable and meaningful for their crew members.